“Is Amazon Working Backward?” That’s the title of NYTimes blogger Nick Bilton post on Dec 24, 2009. Mr. Bilton is writing about Amazon’s product, the Kindle. Regarding the Kindle, he writes, “customers aren’t getting any happier about the end product.”

The day Mr. Bilton posted his story, best-selling author Seth Godin poked holes in it. Mr. Godin’s post is titled, “Learning from bad graphs and weak analysis.” Below is a brief listing of the serious flaws in Mr. Bilton’s approach. The listing is a mashup of Mr. Godin’s thoughts and mine.

1. Bilton should know better than to use pie charts because it’s really hard to determine the percentages when we’re looking at parts of a circle. Bar charts would’ve been much better. Stephen Few has stressed this for years. If you’re posting a chart in the NYTimes, you’d better have read your Stephen Few and Edward Tufte.
2. When your charts are the main support for your story, you’d better get them right. Mr. Bilton did get the table of numbers to the left of the pie charts correct. Perhaps he’d be better served by relying on them over the pie charts to make his point.
3. When you’re analyzing something, you shouldn’t compare opposite populations while ignoring their differences.

Mr. Godin cited 4 specific problems with the piece, ranging from the graphs being wrong (later corrected) to Bilton misunderstanding the nature of early adopters. In addition, Mr. Godin writes, “Many of the reviews are from people who don’t own the device.” Obviously, it’s hard to take a review of a Kindle seriously if the reviewer doesn’t own a Kindle. These are the different populations I’m talking about in item #3 above. I’ll address some of Mr. Godin’s concerns with Bilton’s post now and fill in some of the gaps that Godin left to be filled.

Mr. Bilton tried to make the case that each new version of the Kindle is worse than the one before it. His argument is based almost exclusively on the pie charts below, specifically, the gold slices of each pie. The gold slices are the percentage of one star reviews (lowest possible) each Kindle receives.

Here are the original 3 pies that Mr. Bilton showed in his post. 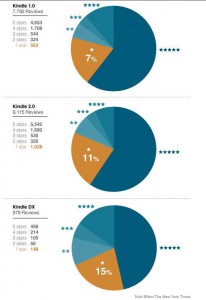 Despite difficulties in estimating the size of each slice in a pie chart, it is apparent that the 7% slice in the first pie chart is much larger than 7%. His corrected version is here.

Another problem Godin has with Bilton’s piece goes to the nature of early adopters. “The people who buy the first generation of a product are more likely to be enthusiasts,” writes Godin. The first ins are more forgiving than the last ins. I can’t really argue with that insight. My brother, an avid tech geek, is an early adopter of lots of tech gadgets. He was the first person I knew to buy an Apple Newton. I don’t recall a single complaint from him about the Newton, despite it not being able to recognize handwriting, which was its main selling point.


It’s clear from these charts that the reviewers who didn’t purchase a Kindle are much more likely to give a one star rating compared to the reviewers who Amazon verified as purchasing the Kindle. With each Kindle release, the non-verified Kindle owners were consistently four times more likely to give a one star review than the Amazon Verified Reviewers—the ones who actually purchased a Kindle. What’s up with that?

Let’s look at the reviews from the verified purchasers. The percentage of one star ratings each new Kindle edition receives doubles from 2% with Kindle 1, to 4% with Kindle 2, and then moves up to 5% with KindleDX. However, this evidence provides very weak support for Bilton’s claim that Kindle owners are getting progressively less happy.

What about the reviewers who are happy to very happy with the Kindle, the four and five star reviewers? Once again, the non-verified Kindle reviewers provide consistently lower ratings than the reviewers who actually own a Kindle. And once again we see the trend of the non-verified reviewers liking each new version of the Kindle less than the previous one. The four and five star ratings for actual owners of the Kindle jibe with Mr. Godin’s claim that the early adopters are more likely to be enthusiasts than those late to the game.


So there you have it, Mr. Godin’s hunches are correct!

What’s most interesting to me, though, is the fact that 75% of reviews of the Kindle aren’t made by people who own a Kindle. On my next post on this subject we’ll hear from a good friend of mine, and text mining expert, Marc Harfeld. We’ll mine the text of the 15,000 customer reviews looking for differences in the words used between the verified and non-verified Kindle owners. Perhaps that will shed light on this mystery. We’re also going to weight the reviews by the number of people who told Amazon that they found the review helpful. You’d think that a review that was helpful to 1 out of 3 people is different than a review that was found helpful by 18,203 out of 19,111 people, like this one.

Lastly, we’d love to hear suggestions from you on other next steps we might take with this analysis.