My award winning dashboard is at the bottom of this post

Last month real unemployment stood at 17.2% and 26.9 million Americans were out of work.

The U-3 statistic includes unemployed people 25 years old or older expressed as a percentage of the civilian labor force ages 25 and up. It doesn’t include “discouraged workers”. Discouraged workers are people who want to and “be available for work and have searched for work in the prior year, even though they are not currently looking for a job because they feel their search would be in vain.” I wonder if all the out of work autoworkers in Detroit who lost their jobs a year ago are measured in the U-3 statistic.

Moving to U-5. The U-5 measure includes the “marginally attached” workers, those people who have given up looking for work for reasons like child-care or transportation problems. These people could take a job if other things happened, like they got day care, or could catch a bus or a train to work.

Last, but not least, the U-6 indicator. It represents the people in U-3 through U-5 plus all people working part time for economic reasons, aka, underemployed workers. Here’s a quote from the paper from the BLS that I site above, “U-6 provides the largest conceptual break with the official measure of unemployment; it is expected to be useful to those who want a single measure to represent a general view of the degree to which existing and potential labor resources are not being utilized.” I like to start with that figure to help get things into focus and perspective–27MM out of 156MM Americans are out of work or working part-time and are underemployed.

The November update is showing lots of interesting things going on with the long-term unemployed (27 weeks or more). Also, be sure to check out the Industry section on the bottom right side of the dashboard where things are changing fast. Seventy percent of industries covered in the section reported an increase in weekly hours of production for November. Here’s the trend for the percentage of industries (there are forty reported by the BLS) seeing an increase in hourly production over the last 12 months,

. All of the statistics I report are seasonally adjusted, so this isn’t a pre Christmas bump. 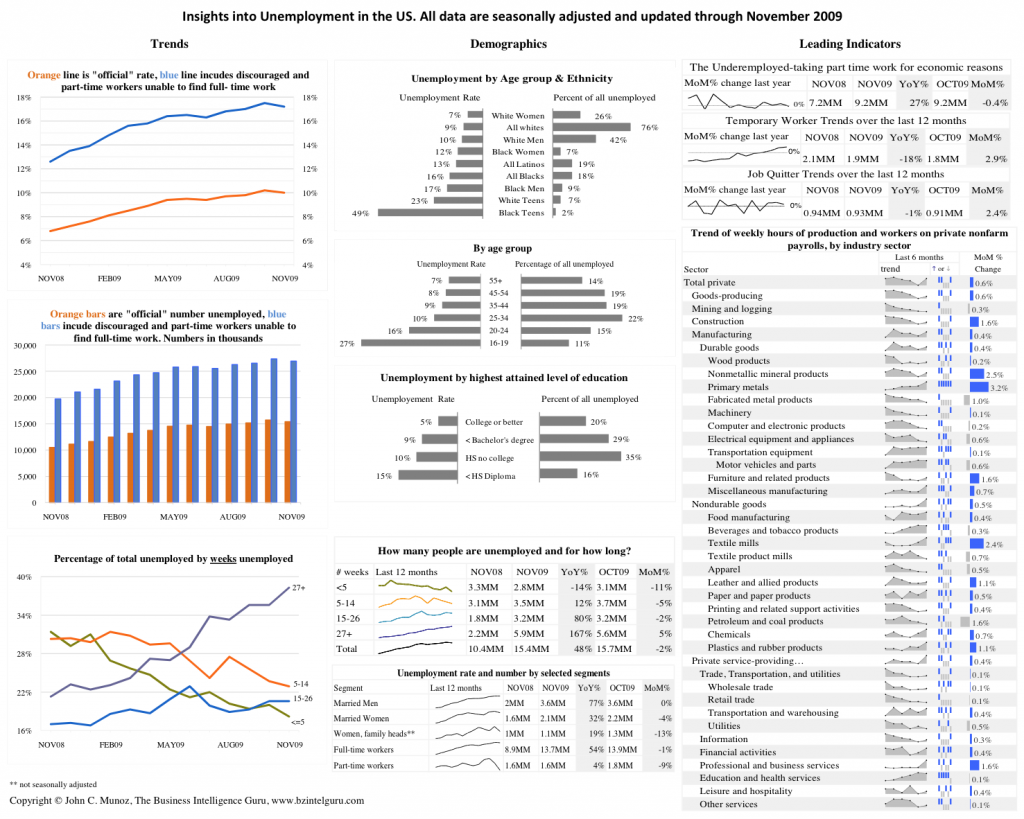 1 thought on “November's Real unemployment above 17% and 27 million Americans out of work, but there are bright spots. My dashboard shows you where things are starting to improve.”